An example of article writing + photography:
Article and photographs by Russell Hammond

FLYING FISHMAN IN PURSUIT OF A DREAM

Elliot Fishman plans to visit Bogotá as part of his research for a Social Science and Planning Degree (IUEM) and if it were possible he would cycle there.

Elliot Fishman is off to Bogotá, Colombia. Why? There are lots of cycle tracks in the capital city of course! The 28-year-old student is a self-confessed bicycle enthusiast and in recent times the government of that city has made major policy changes to accommodate riders and walkers. With his beloved bike in one hand and notepaper in the other he is about to embark on a 6-month trip of the South American country to complete research on his major – Sustainable Transport. He will be hoping to learn from the city’s experiences in urban planning. 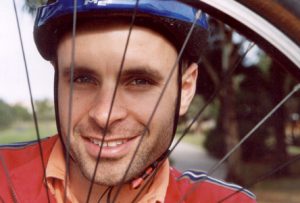 Either by accident or a natural course of personal development, but it was in 1997 that Elliot discovered that while commuting in Brisbane there were too many one-ways and parking problems for him: It was easier to travel in the sunshine city on two wheels than four. He bought a bicycle and a passion then developed for the cycling culture. This new attitude assisted him to nurture an interest in the notion of sustainable transport. Feeling more inclined to preventative measures than cures, the qualified podiatrist with over two years professional experience took a new career direction, and enrolled in the IUEM Masters programme – International Urban and Environmental Management – majoring in Sustainable Transport. A normal progression from walking to riding, one could say! Using our feet more often rather than fixing them later as a result of lack exercise has become his passion.

“I would love to learn about their culture particularly in regard to the bicycle way of life and sustainable transport” the Elwood resident enthuses.

Bogotá, The Latin American metropolis, has an ultra-progressive attitude towards the creation of a more pedestrian-based city rather than a car-based one. In the past few years the city planners have realised that the solution for congested cities around the world, that is to build more roads, has not worked. Adding extra roads will only relieve the traffic problem short term – in actual practice it creates space for cars and essentially generates more traffic.

The RMIT student will be the guest of the NGO organization The Human City Foundation or more correctly Fundación Ciudad Humana, and their primary role is to develop plans and lobby governments about the construction of human based cities. His work will involve helping them in translation of documents, writing press releases in English and passing on his knowledge in urban planning as well. In return they are providing him assistance to stay in the city and the opportunity to study and perhaps to meet the people involved with the transport projects. The impending South American resident is hurriedly swapping his thesis writing for part-time Spanish lessons in anticipation of a large culture change but is definitely looking forward to the adventure.

Through research, he discovered that the Bogotá has the most cycle paths of any city in the developing world mainly due to a previous city mayor Enrique Penáloza, elected from 1998 – 2000. Penáloza was a hardliner and some of his plans included the construction of more pedestrian and cycle tracks for the city; detrimental to the informal local stallholders who used the pavement space more for economic reasons. Some of his actions were not welcomed and the mayor was once threatened with impeachment but responded, “I care more about the city than my mayorship”. The results have been successful, with the vendors being accommodated in more official premises and the intended creation of wide walking and cycling tracks. 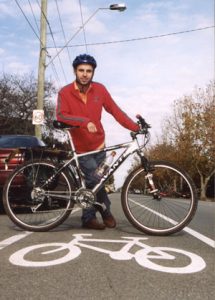 The practicalities of making a city more human friendly have become his primary concern. By 2007 for the first time in history there will be more people living in cities than in rural areas worldwide. Bogotá has a vision for the future that Elliot, in his final year of his masters’ degree, would like to study and understand.  The car is seen as a threat to their future, with many South America cities regular breaking the air quality guidelines set out by the World Health Organization by up to more than 5 times the prescribed figure. There are few choices left: they have to do something. The city also supports that annual Car Free Day, blocking off more than 32 000 hectares of the city from cars with the exception of taxis. In addition, every Sunday and public holiday the car is prohibited on 150 kilometres of capital’s roads and transformed into temporary playing fields, aerobic arenas, food stalls and playgrounds.

Sustainable transport is not limited to just riding bicycles; it also involves the development metro systems, dedicated bus routes and anything that will reduce the number of cars on the road. Bicycles fit nicely into the context of the holistic plan: they are environmentally friendly and healthier and they need 12 times less parking space than a four wheel gas guzzler too.

Far from economic decisions, although bikes cost virtually nothing to run, Elliot enjoys the camaraderie of cycling’s subculture. He claims it is far easier strike up conversation with a friend out on the road, or even make a new one. The bubble, he believes, that envelops us in the car lessens our chances of human contact. The health advantages are also incalculable. Riding a bike has been a life changing experience for the Melbourne student; he happily says it is proactive in the helping the heart. The growing sedentary lifestyle of computer games and Internet is worryingly detrimental to our health, especially in kids. Medical practitioners recommend daily exercise of at least 30 minutes, which is easily obtainable using pedal power. A physically inactive lifestyle is the equivalent of smoking 20 cigarettes per day.

Over 40% of our young Australians are over weight, and worldwide we are not alone.

The cycle racks at schools are used much less than they were in the past. Elliot believes that cars have created a vicious cycle: The more cars on the road, the less the parents will want their children walking and cycling to school. A 1971 UK study indicated that 80% of journeys by school children where on foot or bike, today that figure is 10 times less, down to 8% and according to 1999 Melbourne statistics – 80 % of journeys were made in cars, 3 % in the train, 2 % on bicycles, 1 % each for trams and buses. The City of Port Philip in Melbourne is hoping to rectify the situation. The south Melbourne precinct has been active in the community by facilitating the “Walking Bus Project”. The “bus” with children “on board” is flanked by parents and teachers walk to local schools every working day with “stops” along the way.

Some cities in the world have already taken measures to cut down traffic. In 2003 London introduced the daily £5.00 Congestion Charge – if you want to bring the car to work you will to pay for the privilege. Early reports indicate that the system is working with the average travel time taken to work by any method before 2003 was 46 minutes, post 2003 the time has been reduced by 6 minutes – down to 40 minutes – proving people can travel to work quicker without the car. The city councillors of Bogotá have implemented time based methods of car control; certain cars must stay off the roads at specific times e.g. if your number plate ends in 4 you cannot be on the roads between 7 and 9 am on Tuesdays or to that effect. This has forced car commuters to take the bus, ride, walk or get a lift and the functioning and the practicalities of sorts of schemes that Elliot would like to scrutinize.

The Colombian capital will not be his first destination. Along the way he plans to visit Groningen, Netherlands a city where at least 50% of journeys are undertaken by bicycle. The European country has been proactive in reducing the number of cars on their roads. In addition to a conference in Berlin Towards Car Free Cities, he also plans to visit London on his way to South America and ride with Critical Mass – a global movement that celebrates the two-wheel mode of transport. The interest group acts more on spontaneity with no official organisers or even a charter – they just ride bikes. On a warm Melbourne evening up to 500 participants can be seen pedalling around the city streets, one Friday night a month.

If Elliot was elected mayor one day or employed as a city planner, we may see some of the city’s parking garages turned into accommodation, more people riding and walking on car free city roads and dedicated bus routes to take us in and out of the city. For now that is a distant future, meanwhile he will hopefully be swapping ideas on urban planning with custodians of the South American city, and with any luck, in fluent Spanish! He hopes to see workable solutions to alternative transport systems that will help reduce greenhouses gases and human powered transport is the way to go!